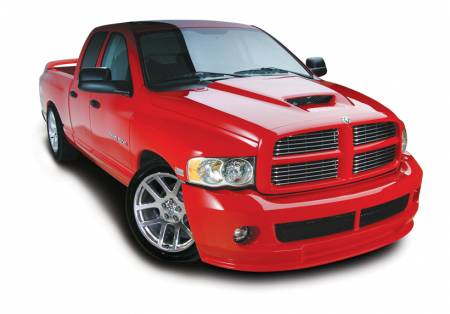 A Dodge Ram SRT edition commands respect. And although you may not own one, that doesn’t mean you can’t get that same respect by giving your 2002-2005 Dodge Ram the SRT look. Kick off your visual overhaul with this SRT-influenced hood.

This hood will give your Dodge Ram a much more aggressive appearance. Not only will it make it look lowered, but it will also give it edgy styling. Separate yourself from every other Dodge Ram on the road by making yours look like an SRT edition. Less than 10,000 Dodge Ram SRT10 editions were made during the truck’s three-year run from 2004 to 2006.

You won’t have to worry about under-hood clearance issues once you’ve installed this new hood. Tucking away superchargers, turbochargers, intakes and other parts can be troublesome with a stock hood. This upgrade is going to render that concern irrelevant. Installation is simple; just utilize the preexisting OEM hood hinges, latch and hardware for a direct OEM replacement. Complement your new SRT10 hood with a matching cervini parts that we also offer!